The owners of this 1909 Craftsman on Mount Washington, which is a Historic Cultural Monument, wanted to add a detached art studio to the rear of the house. Neither of the owners were unbendable when it came to the style, so modern architect Nick Corsini designed a studio that, in his words “would create a dialogue between the buildings and the site.” The use of simple building materials achieved the desired effect and honored the craftsman ideal of simplicity. Simple concrete blocks helped alleviate the need for heating and cooling systems and in Corsini’s words “the rust pallet created a warm relationship with the existing house.” A butterfly roof made of corrugated steel strongly reflects the eaves of the house and clerestory windows allow natural light to permeate the space. Utilitarian built-in cabinets are made of okoume plywood, which also lines the ceiling. The final product is definitely modern, but also reflects the craftsman vision. The sensitive addition to this property that honors the past and salutes the present is truly deserving of the 2014 award. 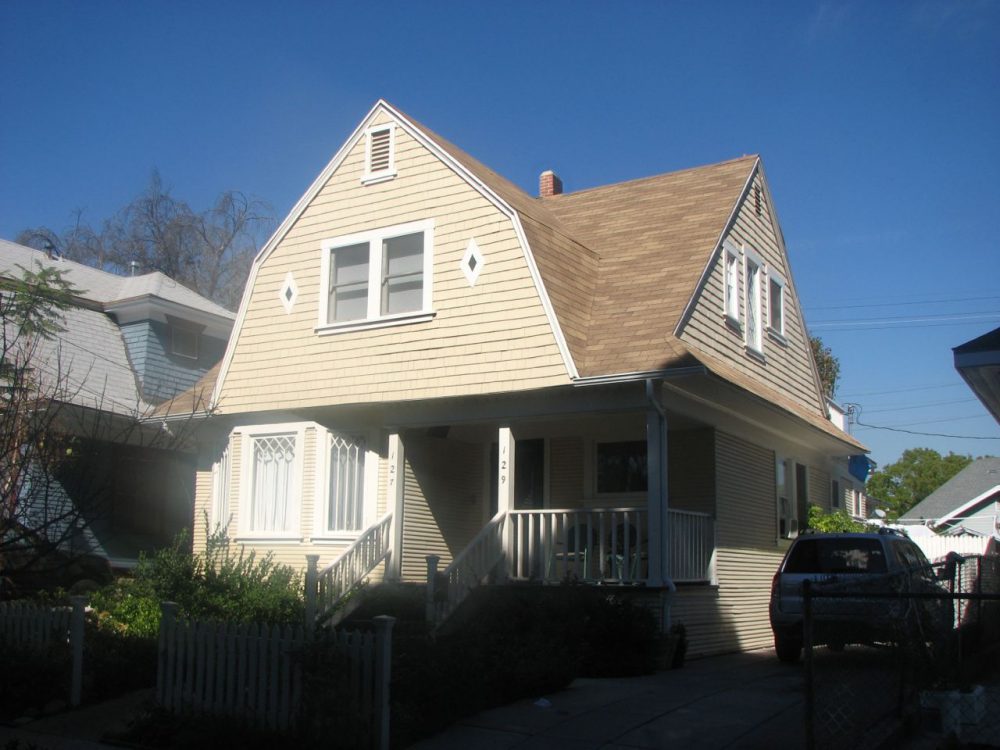 This Dutch Colonial was returned to its former dignity by removing inappropriate stucco and replacing the original windows. The redwood siding was able to be saved but the upper shingles had to be replaced. The only thing that remained of the windows were the original openings. Period appropriate window sashes were salvaged and the two bay windows were created around them. All the double hung windows and frames had to be replicated. A similar house showed two diamond shaped embellishments on the upper story which the owner chose to duplicate. A light tan and white combination cover the house and a beautifully landscaped yard surrounded by a white picket fence have returned the turn-of-the-century house to its original state. The commitment and dedication of the owner to architectural accuracy is truly commendable and very deserving of the 2014 award. 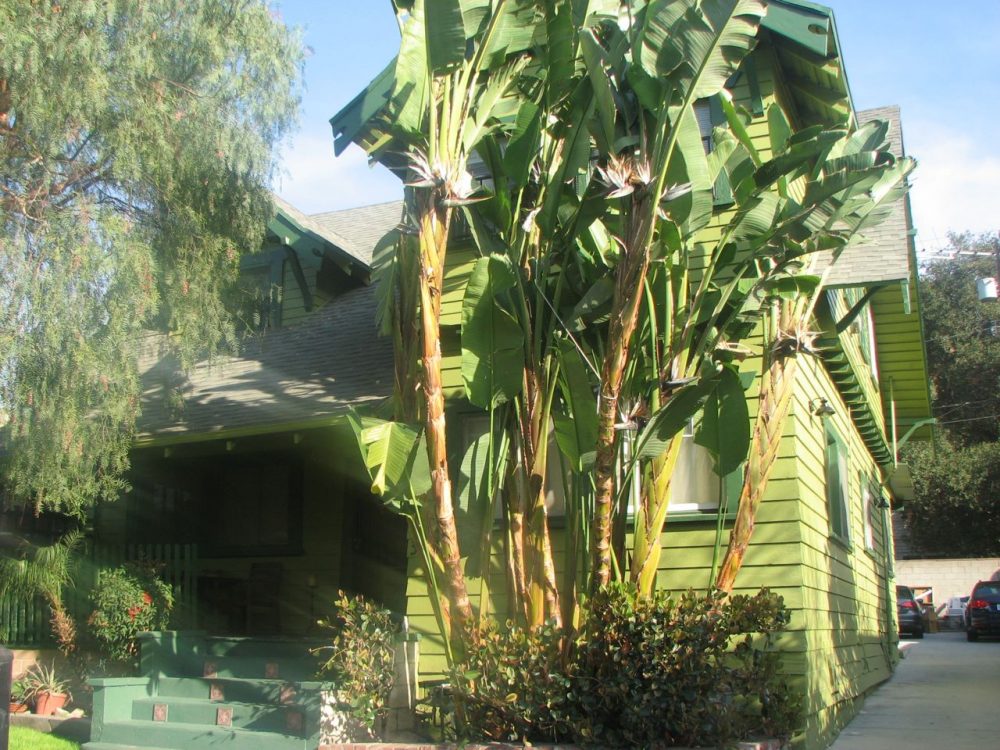 According to the owner, this property looked almost abandoned when he purchased it. The yard was badly overgrown and the house begged for a paint job. After much scraping, an arts and crafts green now covers the large Craftsman which exhibits both a dormer and a gable on the front and two side facing gables which are all embellished with curved knee braces. The transverse gables on either side are slightly cantilevered over the first story. Several casement windows have four lites over one with dark green frames and white sashes. The front porch is highlighted by decorative tiles on the risers. A beautiful pepper tree is once again visible and a gigantic bird of paradise towers to the second story. The owner’s pride in his home and his dedication to the historic integrity is truly deserving of the 2014 award. 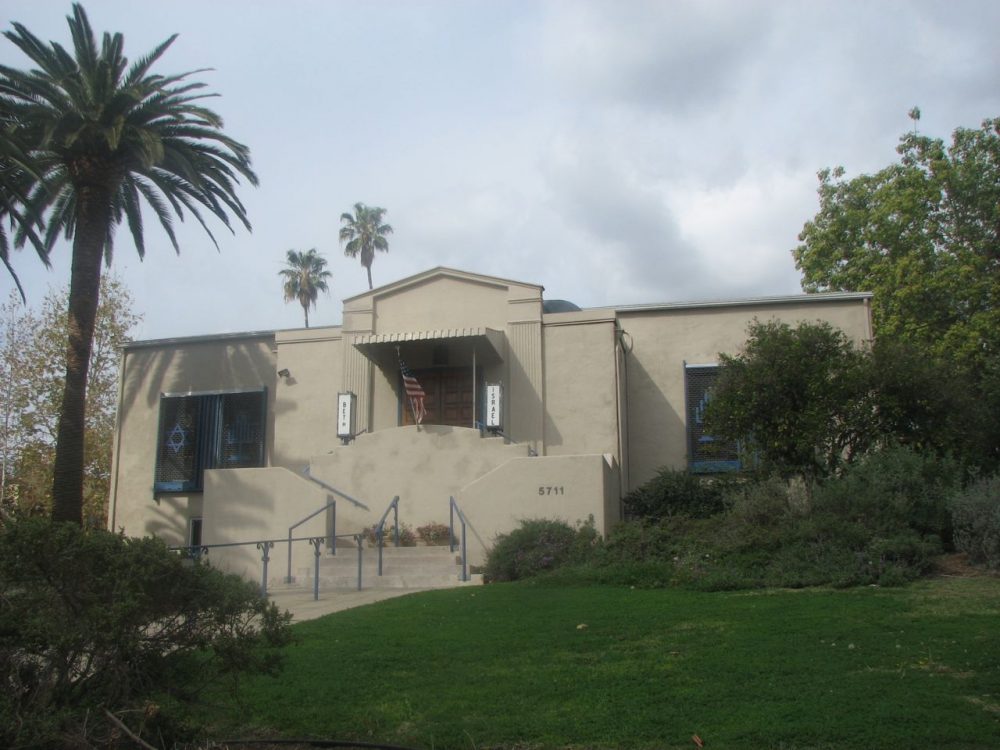 In 1923 a group of a dozen or so eastern European Jewish immigrants had the desire to create a religious center to serve the Highland Park and Eagle Rock communities. For seven years the women rallied together by raising funds, holding services and classes in various locations, and even purchasing a lot on Monte Vista Street in the hopes of realizing their dream. However, by 1930, and the start of the Great Depression, these women were beginning to think all their hard work was for naught. But through determination, encouragement and just plain will power, construction of Temple Beth Israel began in August 1930 and was officially opened in December of that year. Gerson C. Cohen, a third year architectural student at USC, designed the original building. This temple added to the large number of churches that Highland Park had and still does to this day. The simple modern structure is symmetrical and exhibits two pilasters on either side of the front door. The Temple has been a mainstay on Monte vista for over 80 years and its continued care is to be commended. The 90 years of service to its Jewish congregation and the community as a whole is also to be applauded and is truly deserving of the 2014 award. 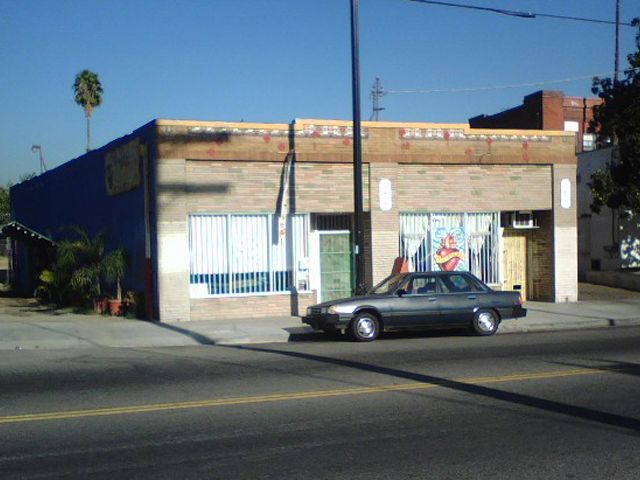 This studio is a valuable cultural resource in the Highland Park neighborhood. In the last 12 years it has presented over 300 shows in the Northeast L.A. area that primarily focus on Latino artists of Mexican and Central American descent whose work has not been represented in mainstream galleries. As stated on the studio’s website, “the showing of multicultural arts on a monthly basis in a working class community can go a long way in educating people to the importance of diverse art in our lives.” In addition to exhibiting works of art, the studio conducts monthly poetry readings for community members and guest poets to read their creations, and holds weekly classical guitar lessons by a master guitarist for beginning to advanced players. The Avenue 50 Studio deserves this 2014 award for its ability “to build bridges of cultural understanding through artistic expressions” that reflect and enhance the Highland Park community. 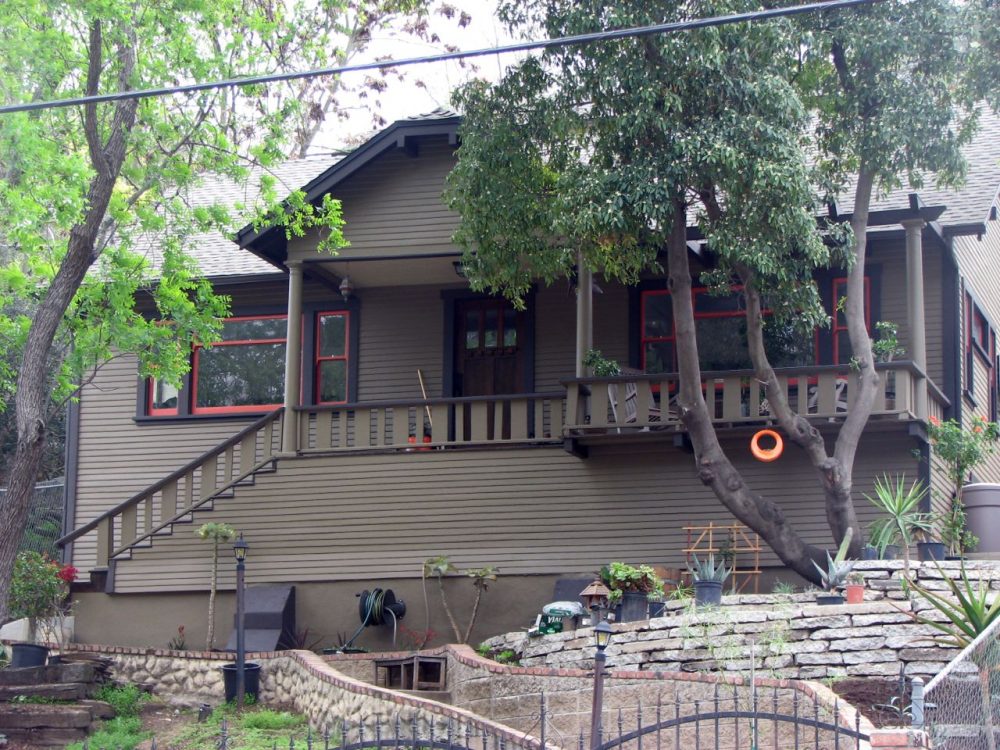 This single story Craftsman sits high above the street and is once again inhabitable after a new foundation, new roof and a welcome paint job. It features an extended porch roof that is supported by two Tuscan columns. The wooden porch is original and the front entrance has been replaced with a period appropriate door. A light and dark brown color palette and orange trim provide the final touches to this attractive home. Leading down to the street is the original curved walkway with brick siding and concrete steps. The tremendous amount of work and commitment to renovating the property is commendable and truly deserving of the 2014 award. 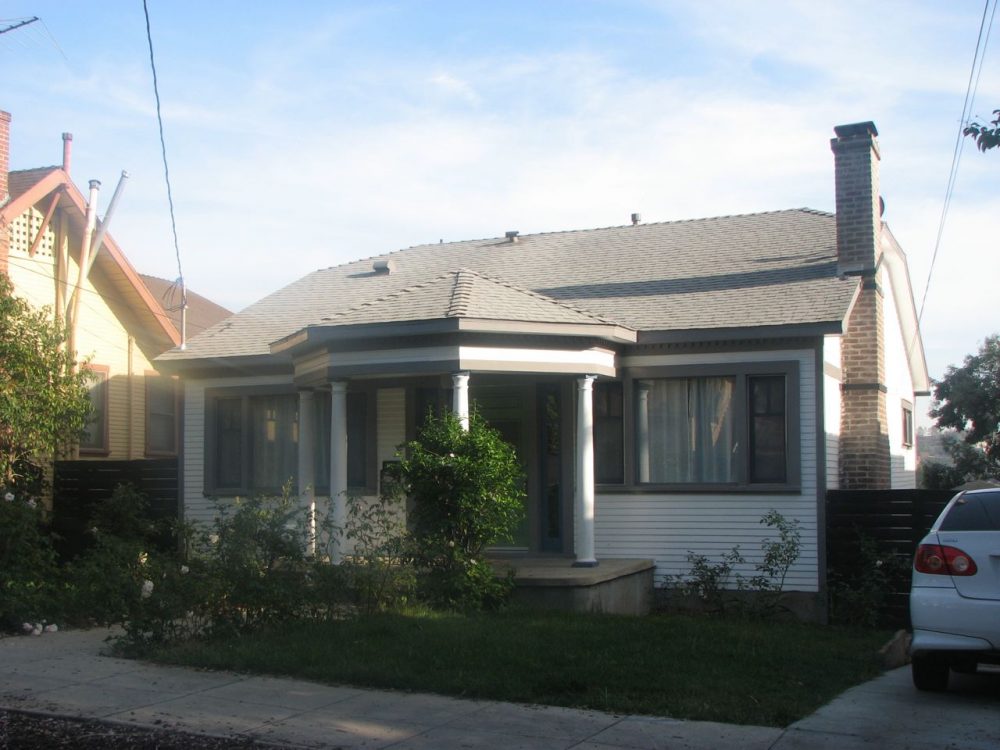 The restoration of this 1921 cottage turned a dilapidated structure into a preservationist’s delight. The colonial influenced residence features a protruding classical front porch highlighted by four Tuscan columns. The original front door has lites on either side and the concrete front porch has founded edges. The white paint on the small clapboard siding and Tuscan columns is offset by blue and grey trim. The pleasing results of this undertaking display pride of ownership and are definitely deserving of the 2014 award. 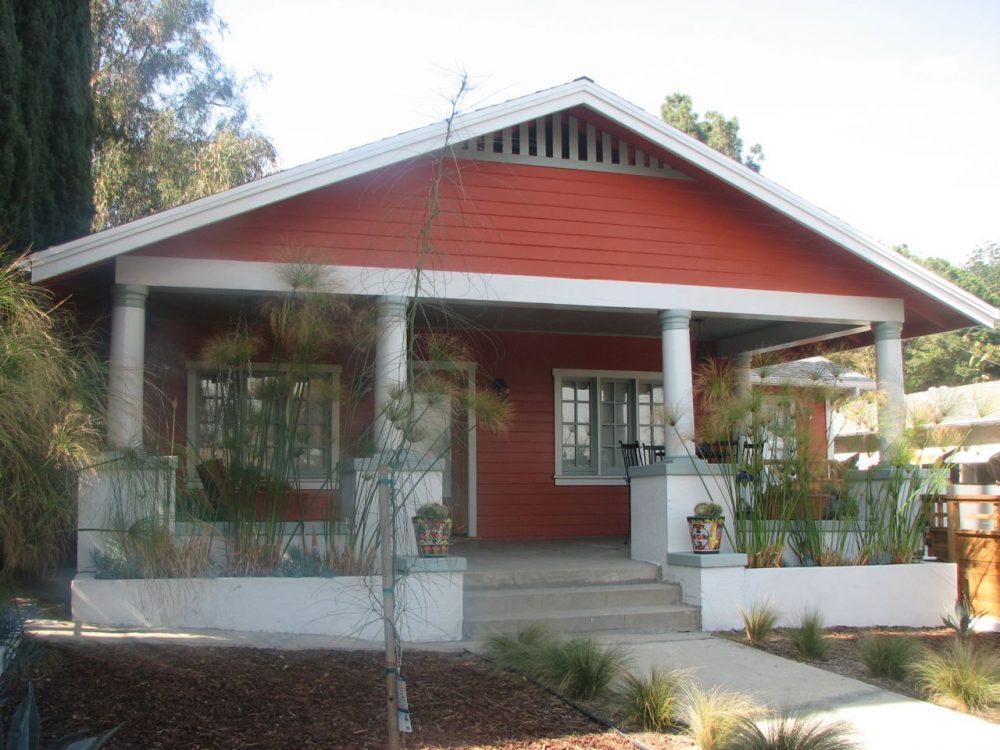 This front gabled Craftsman features a wide front porch with four Tuscan columns that are supported by concrete pillars. The owner did a complete renovation that included de-stuccoing the house and replacing nearly half of the clapboard siding. All the windows were recreated by using a single window that had been left under the house. A beautiful shade of salmon and a complimentary light green and white trim have breathed new life into this charming home. A Craftsman style wooden fence completes the picture. The owners are to be commended for their dedication to historic integrity in the renovation of this property and are truly deserving of the 2014 award. 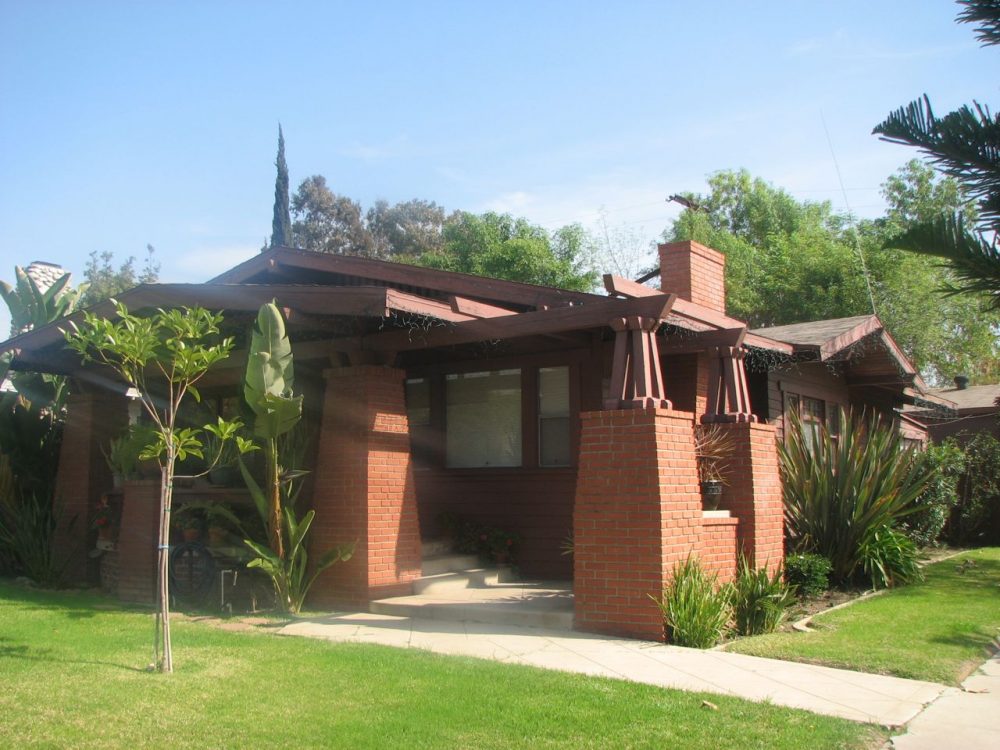 This same home won in 1993 for sensitively restoring brickwork that had been damaged in the 1987 earthquake. Through the years this home has been lovingly maintained and was again nominated this year. This single story Craftsman is highlighted by four large brick piers that support the front entrance. The concrete porch has a rounded edge that sits above a brick foundation. The earth tone that covers the entire house harkens back to the original Craftsman ideal that tried to blend the structure into the surrounding land. The simple elegance of this home has been lovingly cared for and is truly deserving of the 2014 award. 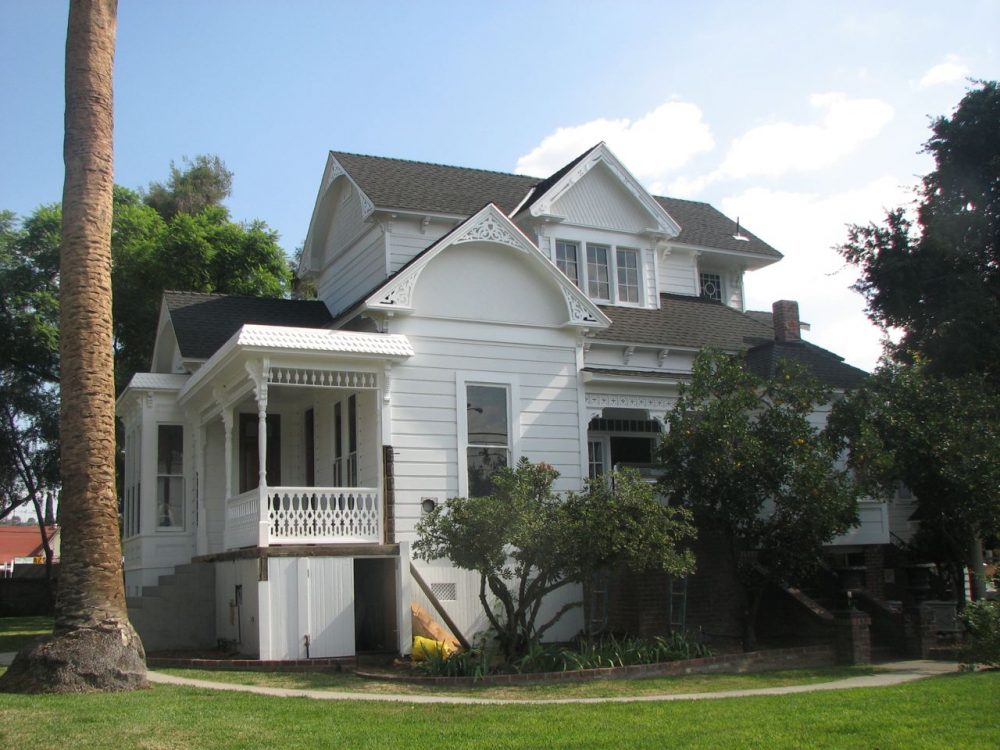 This 1886 Queen Anne Victorian sat vacant and almost invisible for many years. Through the efforts of the Garvanza Improvement Association and the complete dedication of the owner, the Dr. Smith House has been returned to its turn of the century glory. Visible once again are the tall Italianate windows, decorative fretwork surrounding the numerous gables, and the spindled porch columns. The concrete Tuscan columns that lined the main entrance are once again standing proud. A cottage that was built in 1920 was also lovingly restored. The tremendous undertaking that went into the sensitive restoration of one of the highlights of Garvanza is truly deserving of the 2014 award.